I’m going to make this short and sweet.

How am I expected to keep up with Santa Clause, the Elf on the Shelf and now the tooth fairy? I’ve pretty much become a big fat liar all in the name of “magic”.

Thank goodness The Plan is now in on the Elf thing because according to him I’m “slacking” in that department. (I keep forgetting to move the darn thing so he’s stepped in to help so I can stop making up stories about why the Elf is stuck. )

Yesterday though just took me over the edge, Baby Girl lost a tooth. Literally. It fell out of her mouth and into the great abyss of her classroom never to be found. She got home worried that she would not be making any profit off this tooth and decided to write a note to the tooth fairy explaining the situation. 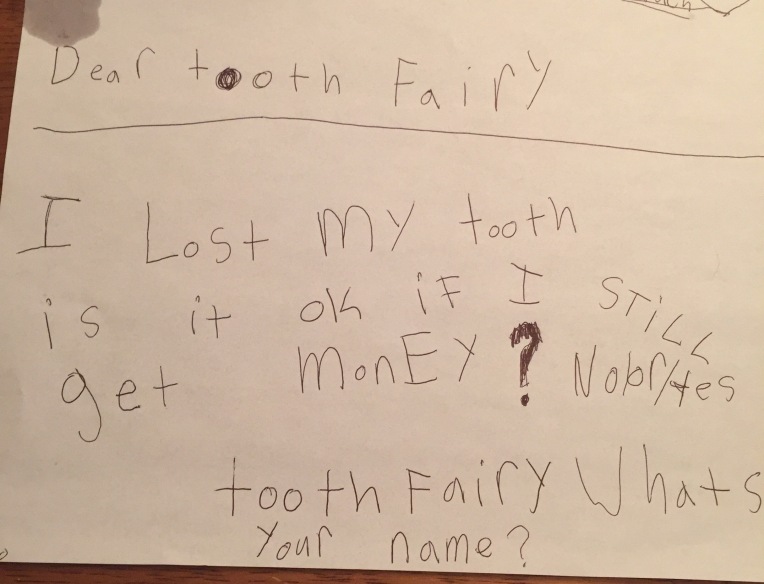 This morning she woke up and immediately looked under her pillow. Nothing. I completely forgot. The tooth fairy had not come. So what do I do? What I do best. Make up some story about how she forgot to put the note under her pillow and how things under pillows is what makes the tooth fairy’s bell go off so she knows to come and check. ( Maybe I should do something constructive with my lying and write children’s books).

Baby Girl bought my story and will try again tonight by putting the note under her pillow. All I have to do is wait till she’s asleep, pull out the note, leave some change, and remember to move the F ing Elf. Sounds simple right?

It’s funny how over the past few days that I have been trying to keep an eye out on whether or not I am truly unreasonable or not, I am indeed finding myself having several “emotionally charged” reactions about what others would see as small things.  You may remember the story I told you about the lemon in my tea. This one may just be an equivalent on the unreasonableness meter.  Here’s’ my story and you can be the judge.

It was a morning just like any other morning. Baby girl was looking for her Shopkins instead of getting her shoes and coat on, Surprise was eating his second bowl of cereal, The Plan was Snapchatting (I don’t think that’s a real verb but oh well) while simultaneously styling his hair and Mr. Liberty Dee was still home although his alarm and started going off two hours prior and I was not feeling well and I was running late.

I managed to drop The Plan and Baby Girl off on time and as I got to the GO station realized I really wasn’t  well and decided to turn around and work from home  (a wonderful little perk).  I called Surprise to make sure he had headed off to school when he informed me that he was out having breakfast with Mr.LibertyDee and that Mr. LibertyDee thought I should join them. Sure I thought, they were just up the street from our house and I had to eat anyway so off I went.

Mr.LibertyDee had ordered for me and the food was just being served as I got to the table. About half way through our meal I notice that Surprise is drinking orange juice from a bottle.

Let me explain that we were NOT having breakfast as McDonalds or at some crappy breakfast buffet. We were at a place that we frequent often which serves a nice fresh breakfast and “fresh orange juice” is on their menu.  Here’s’ what happened next:

Why is surprise drinking out of a bottle?

I don’t know, that’s what they brought

Since when do they serve orange juice in a bottle?

I don’t know, maybe they saw he’s a kid and gave him a bottle to put in his lunch box

That makes no sense, why would they give “a kid” bottled juice? If he’s here for breakfast why would they worry about his lunch? (I start to scan the menu)

Look! Right there! “Fresh Juice” the menu says Fresh juice. Why do they have fresh juice on the menu and then bring over a bottle of juice and if they do that for kids it’s stupid no They’re stupid because the bottled juice has crap in it why do they want to feed crap to kids?!

It’s ok hon. I don’t think we have to make a big deal.

I realized at that moment that I had completely worked myself up. My heart rate was elevated , my face was warm and the only reason I didn’t address it with the restaurant is because I though maybe I was over reacting a little bit and maybe my reaction was a little “unreasonable”.

As I’m writing this though, I think that I should have said something. If you go to a restaurant for breakfast do you not expect fresh orange juice?

OH NO!!! I just thought of something…

What if in all this time I have been going there,  they have been serving me bottled orange juice in a glass? Disguised as fresh orange juice!  AUGHGHGHGHGHGH!!!!

A few years ago, maybe 4 (it’s all such a blur), I decided to bring the Elf on the Shelf into our house. Why not? It’s not like I have anything to do over the holiday season after the kids have gone to bed and I’m exhausted right?  I had no idea what a big responsibility it is to keep the ELF thing going for a few weeks. I also didn’t realize the amount of pressure associated with the said Elf. While I was struggling to remember to move it from one table, plant holder or shelf to another, my friends on social media were posting pictures of their Elf’s elaborate hi jinx , with props and characters and storylines.

Year two I stepped up my game and too began posting pictures of my Elf doing silly things like drawing sunglasses and a moustache on my sons picture that hangs in the living room and having a marshmallow fight with our Nutcracker and even imitating Mylie Cyrus on her Wrecking Ball.

Although this was fun and the kids loved finding what the Elf was up to every morning, my older son, who’s more than skeptic about the whole thing, named our Elf Santa Stalker because that’s basically the premise of the Elf who’s there to silently watch your every move.  I also suddenly found myself making up all kinds of elaborate stories about why the Elf didn’t move (someone must have gotten up to use the bathroom as he was leaving and he couldn’t move so he missed his ride) , why the Elf has tags ( because it’s part of their camouflage, if someone sees them they can pretend to be toys), Why there are boxes of Elfs at Indigo (that’s for families that don’t believe, but still want to play with the Elf)  and yes, you don’t  have to tell me that that’s probably not right and I shouldn’t feed my kids all this crap.. blah, blah, blah (and I say that with all due respect) but the truth is I Love the “magic of Christmas” the fact that it’s not real is exactly the point. For 4 weeks a year I get to create something unexplainable, something memorable, something just plain fun.

Except…. after last years Elf run, I made the mistake of putting him somewhere “safe”. So two days ago when it was time for Santa Stalker to make his big return, he was nowhere to be found.  You can’t imagine the panic I felt as I rummaged through my closet, the linen closet, the back of the bathroom cabinets and he was nowhere. My mind started to race. What if Baby Girl realizes it’s December 1st and  there’s no Elf , what do I say? This is where the elaborate story piece plays a part.

Here are the top 3  responses I was ready to give to Baby Girl:

Thankfully there was no need to actually use any of those explanations as Baby Girl woke up and went on with her day without saying a peep about the Elf. I on the other hand rushed home, running though the underground PATH to stop at an Indigo store near the Go train station to buy a new Elf. Do you have any idea what happens to me when I “panic shop”? I impulse buy. I went in for an Elf and came out, with an Elf (the Delux set with book and DVD) 2 blankets and an Elf hi jinx kit. Yuppp  you read that right. It’s a kit that comes with ideas for your Elf plus accessories like a candy cane grappling hook, an Elf harness and candy cane coloured rope etc.  My hope is that although I completely over spent, due to my own disorganization, that the ideas and accessories will take the stress over what to do with Elf away and perhaps take with it the need for the elaborate, let’s just call them what they are, lies in order to cover for Santa Stalker’s inconsistencies. I’ll keep you posted. 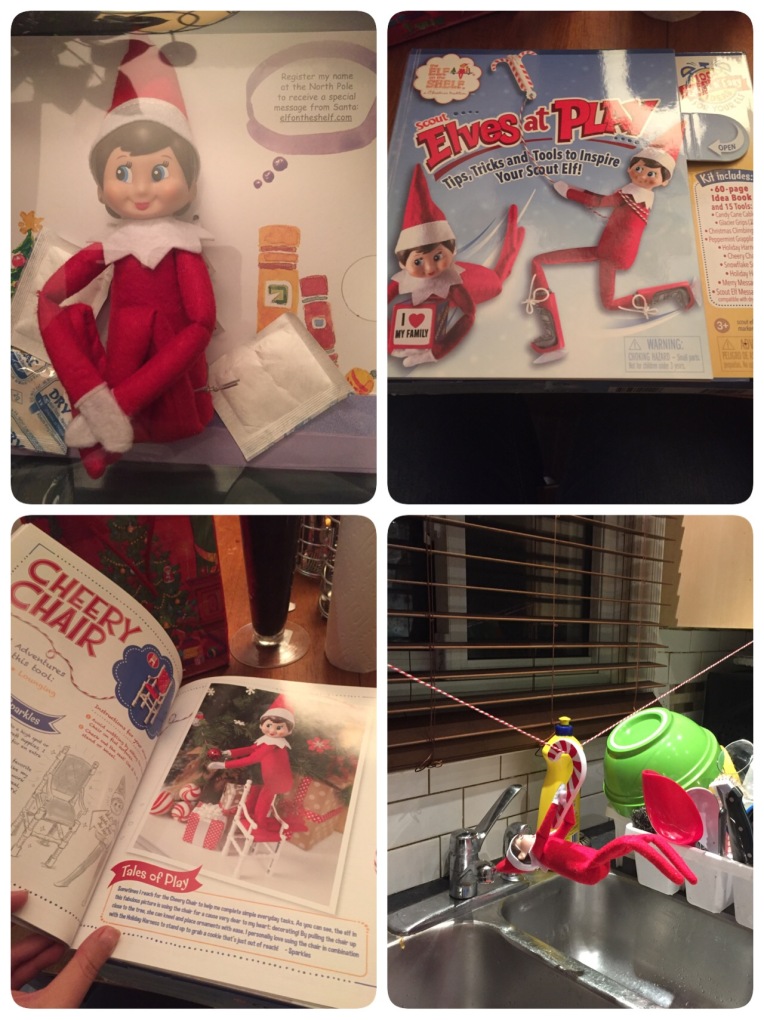 I will be the first to admit that I can sometimes be somewhat unreasonable. I consider myself an emotional person and I don’t believe that there is room for ” reason” where emotions are concerned.  Mr. Libertydee and the kids like to call this unreasonableness “the crazies” but I have decided to celebrate my emotionally charged unreasonableness by starting to blog about these unreasonable reactions.

Like GI Joe said “knowing is half the battle”  or Dr. Phil’s famous ” you can’t change what you don’t acknowledge” by identifying these “things” and writing about them perhaps I can change. Or… maybe not…

So let’s start with unreasonable reaction #1 shall we.

Let me set the stage. I’ve been sick, like flu sick and I had a bit of a rough day at work and tonight was my last improv class so we did a show for family and friends but my family wasn’t there because my son got sick. Anyway , I sucked it up for the show and got home after 10:00pm, I sat on the couch, alone, enjoying the peace and quiet and thought I’d make myself a cup of tea. I love my tea. Red Rose, a teaspoon of honey and a squeeze of lemon with a slice dropped in for dramatic effect.

What could possibly go wrong, I’m alone, I’m making tea, not a care in the world right? Well let me remind you that this is about unreasonable reactions and let you know what happened next.

I go over to the fridge to take out the lemon only to find…., ready?????? Wait for it……someone has already cut the lemon. Lengthwise! Who the F$&@k cuts a lemon like that? What kind of savage ruins my lemon like that?? Are you kidding me? What am I supposed to do now? Cut it into wedges?? I don’t want wedges! I want a slice in the shape is a circle for my tea!

Upon reflection, I do think that may have been somewhat unreasonable as I am drinking a cup of tea with a wedge of lemon but although it tastes the same.. it’s just NOT the same.