Continued from We Yell, We Cry…Part 1

We drove home in absolute silence. We now had one hour at home, before we had to leave for a birthday party. I decided I would make macaroni and cheese so the kids could eat quickly and I could drop The Plan off at the party by 3:30pm. Now here came the next argument. This time it was about tuna. Yuppp you read that right. Tuna. The Life wanted tuna in his mac and cheese, Baby Girl and The Plan think it’ s gross so of course the whining started again. (I don’t know what it is about that whiny voice that just drives me nuts!!) I was feeling guilty about losing it on Baby Girl earlier so, to keep the peace, I offered to add tuna to some and leave the other plain. No big deal.

After lunch was served, we had about 20 minutes before we had to leave for the birthday party. Baby Girl really wanted one of those drinkable IOGO yogurts for dessert so I gave it to her because, after all, what harm could yogurt do? The  kids went off to keep themselves entertained while I cleaned the kitchen. (As much as I hate the seemingly never ending kitchen cleaning, sometimes it’s the only time everyone gives me a moment of peace) Then I heard the arguing. It was between The Life and Baby Girl. The next couple of minutes are a complete blur. I was so overcome by emotion that I don’t even remember it all very clearly. It turns out that Baby Girl had taken something The Life was playing with and wouldn’t give it back so The Life took Baby Girl’s yogurt and spilled it out on the driveway.  They were both telling me their side of the story simultaneously and although The Plan had not been involved, he maneuvered his way into the argument by taking Baby Girls side in an attempt to dig The Life deeper into trouble. That was the straw that broke the camel’s back. I went over the edge and began to yell at all three of them. I don’t remember the specifics of what I said but I do know that I ended it with “and be assured we will not be going to Wonderland tomorrow!” We had been planning to go to the opening day of our local amusement park for months, we had been counting down the “sleeps” for two weeks and this particular day was going to be the beginning my count down to 40 (more on that in another post).

The kids fell silent and I stomped back into the kitchen. BEEP! BEEP! BEEP! It was time to leave for the birthday party. On the bright side, the kids were smart enough to not complicate things and they got their shoes on and into the car much quicker than I would have expected. Considering the day I was having, I was happy that we were running on time and arrived at the party a few minutes early. So early in fact that the birthday host wasn’t even there yet. We waited around and when it was 10 minutes past when the party was supposed to start, we asked the front desk if perhaps the party was already inside. Turns out we were at the wrong location! The party was actually 15 minutes from my house in the opposite direction.

In an attempt to make this very long story short, by the time I got home that evening I had completely broken down.  I was frustrated that the kids couldn’t get along, I was tired from running around all day, I felt guilty that I had yelled at the kids, and  I was disappointed that we were not going to Wonderland as I too had really been looking forward to it. And so I cried. By this time Mr. LibertyDee was home and he has gotten better at reading the cues and so he made sure I got my space but boy did I cry. I felt selfish that I wanted time to myself, I felt torn and thought perhaps we should go to Wonderland after all, then there’s all that motherly guilt about the lack of patience and having The Plan miss half the birthday party. It was awful. I felt awful. I went to bed.  When I woke up Sunday morning I remembered a saying I had recently heard on Downton Abbey “We yell, we cry, but in the end we all die” and with that I woke everyone up and off we all went to Wonderland. It was amazing.  A day I’m sure the kids will remember forever .  I only hope that it was so great it over shadows the day before.

P.S The Plan read this post today and I wasn’t sure if it was a good idea to have him read it but he thought it was hilarious. He actually said I should thank him and The Life and Baby Girl or else I would have nothing to write about. He also said that he now understood why I snapped and why I wasn’t going to let them go to Wonderland.  He initially thought I got that upset because there was yogurt on the driveway.  SO it looks like I may not be screwing them up as much as I think (for now) 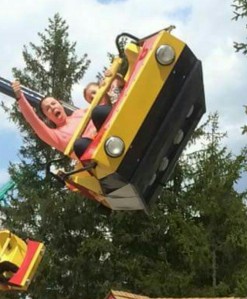 Saturday was a really sucky parenting day. The kind of day that had me just sitting there, completely defeated, like a child whose mom has just told them they’re not going to the amusement park tomorrow after all.

The day started off ok. I got up just after 7:00am (which is sleeping in for me) and I got the kids out of the house on time for the skating lessons scheduled for 9:30am. That’s when it started. The bickering, the insistent bickering, the “he touched me”, the “he started it”, the “she always get her way”. All this noise is happening behind me while I’m driving and I was doing well. I had decided to stay out of it. I decided to let them work it out. I took deep breaths and just kept driving.

After skating we had only half an hour to be home before we were off to guitar lessons.  I gave the kids some clear instructions (at least I thought they were clear)  “When we get home, don’ t bother taking off your shoes, you can have free time to watch TV, play video games, or go outside if you want.  Please make sure the guitar is downstairs by the door so that we can leave in exactly half an hour. I need to do our meal plan for the week and the grocery list.”

We got inside and I went straight to the computer, created the meal plan, made the grocery list and download my coupons.  BEEP! BEEP! BEEP! (I use the stove timer to keep me on track and the beeping meant the half hour had passed and we had 15 minutes to get to guitar lessons) I closed the laptop and bellowed “Time to go!”  The Life was the only one ready to go, Baby Girl had taken off her shoes and had set herself up to colour, she was terribly upset that it was time to go and couldn’t finish her picture. The whinnying started and then the crying. I was able to talk her down, get her shoes on and to the door in record time.  The Plan was outside playing basketball, the guitar was nowhere to be found.” Where’s the guitar?” I asked (I don’t know why I ask these stupid questions, I knew there was only one place the guitar could be. It was upstairs in his room.)” Hum..? The guitar…? What…?”  This has become his go to response when he’s trying to buy time to think of some B.S to feed me. I.e. Hum..? homework …? What… ?, Hum..? Shower…? what..? This time I put my whispering technique into action. I keep trying to yell less and I have found that whispering sometimes has the same effect.

I dropped The Plan off at guitar lessons 8 minutes late and headed to the grocery store right next door with baby Girl and The Life.  I was happy to have scored a “Parents With Children” parking spot ( it’s all about the small wins) but before I really got to bask in my parking spot win I found myself in an argument with Baby Girl in regards to why she shouldn’t bring in her pink princess cup to the grocery store. Where the cup came from? I don’t know. But there it was, and she wanted to bring it into the store.  All of you moms know that a five year old bringing something into the grocery store can only have one of 2 outcomes:

This time I put my natural consequences tactic into effect. The concept is you let them do what they want, and then allow them to suffer the consequences and so I explained there was a good chance the cup would be lost and that I would not be carrying the cup if she grew tired of it. She chose to bring the cup anyway.

We got to the grocery store and not ten minutes had gone by and already the following had happened:

I kept it together though, I really did. Yes there was some speaking through clenched teeth, but overall I really did remain composed.

The Plan joined us after his guitar lessons “Do I have to stay here? How much more do you have to buy? Can I wait in the car? “This is where I started to lose it. Not so much outwardly but I did feel something snap inside me.

We were able to finish the shopping and make it back to the car without much further incident, until of course all the bags were in the car and baby girl asks “Where is my cup?” AUGHHGHGHGHG. The cup was gone. She blamed The Life because she remembered him having it by the pears, but after sending the boys back inside to look around, the cup was nowhere to be found. The crying started, not the regular I’m sad, I scraped my knee crying but the “I’m mad and I want the world to hear it” crying with the intermittent whining and the boogers and the name calling targeted at her brothers.