When I see my doctor for my yearly physical I always dread the question “do you drink?” I always go into a long story about how I don’t think I drink too much and then I go on to pretty much detail every drink I’ve had over the last year like I’m in confession or something.
I absolutely know that I could simply say yes or no but there’s something about my brain-to-mouth connection that just keeps my mouth moving once I start. About 5 minutes into my long winded drinking explanation she’ll usually cut me off and say something like ” so you have a drink once in a while”.
We have been having this same conversation for 11 years. Actually I guess It’s 8 years because I didn’t drink a drop of alcohol while I was pregnant. Although I craved red wine so strongly that it became a bit embarrassing for MrLibertyDee. Every time we went out to dinner or had an event and he left the table, he would come back to find me with my nose in his wine glass, inhaling deeply.

By this point you may be wondering then why is there a bottle of scotch on her night table if she’s supposedly not a big drinker?. The answer is this: Mosquito bites. It turns out that scotch is an amazing itch reliever.
I came back from my vacation with lots of mosquito bites on my legs and the itching was driving my crazy! I couldn’t find my “After Bite” itch ointment ( I remembered putting it somewhere safe which is similar to throwing something into a black hole because I rarely remember where that was) MrLibertyDee had the brilliant idea to “Google”  some home remedies and we were presented with three options
1. Aspirin – mash it up and apply to bites
2. Salt – mix it with a bit of water to create a paste and apply to bites
3. Alcohol- use a cotton swab and apply to bites

brilliant idea. He pulled out a bottle of scotch and a roll of paper towels. I wet a paper towel with some scotch and held it to the bites. Within seconds, the itching stopped! It was a miracle! 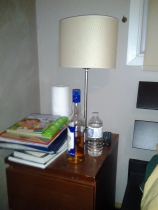 I have suffered from mosquito bites all my life. I can be outside in a crowd of one hundred people and I will be the only one who gets bitten. Then the itching lasts for days, interrupting my sleep and making me cranky. By using the scotch, the relief was almost immediate. I woke up only once that night with some itching. I put some scotch on it and went back to sleep. The itching hasn’t bothered me again since.

The only draw back to this remedy is that it’s hard to convince people you are not a heavy drinker when your whole body smells like booze and you keep a bottle of scotch on your night table.

Do you have any strange but true remedies for bug bites?